Around us, we regularly find people coming together and helping the society in the name of religion. However, we also find them fighting over the same topic. On the other hand, we have a third group which is trying to believe that religion is one of the worst thing that has been created by mankind and should thus be considered obsolete in the modern secular (so called!) societies. This way, we can now classify all of us into three groups:

The emergence of these three groups can only make the situation worse. The interesting fact is that, this division happens in the name of religion only, whether you believe in it or consider it to be obsolete. How are we going to solve this problem? Is religion really a worst thing that is created by mankind? Is religion supposed to unite us? Is it justified to fight in the name of religion? Good or bad, in any case, we need to make an attempt to understand it. For those who consider religion to be evil, just remember the fact that in order to gain control over the evil, you still need to understand it first.

For the sake of simplicity, let’s consider the term in Vedic culture called “Dharma”. It does not literally mean “Religion”, but can still help to understand it better.

First, lets take a look at the world excluding all living beings. We notice that all the elements in the universe can be defined only in terms of its properties. For example, Water can flow and make other things wet. If it doesn’t flow or make things wet, you won’t call it water. Similarly, Fire can burn and provide heat. If it does not burn or provide heat, you won’t call it fire.

Any object that has mass can exhibit inertia and gravitation. The objects, which do not have these properties, are simply called mass-less objects. In Vedic philosophy, these properties that define the entity, is called its “Dharma”. It means, “to uphold”. Since every object upholds their own properties, it can be said that they follow their dharma.

What’s the benefit of following Dharma?

Let’s try to understand it through an example. Try to answer the following two questions:

The obvious answer will be, it’s neither good nor bad, but it’s required. We do not hold water or fire responsible for all possible destructions since we understand that they were simple following their properties without having any intension to kill people. Similarly, they do not follow their properties in order to support life. If that were the reason, then they wouldn’t have acted in destructive manner as well. They simply continue to follow their properties and thus, their effects cannot be termed as good or bad.

In case of living beings and especially humans, the situation is not so simple. We are capable of thinking, have desires and emotions. With the ability of intelligence and communication, we also have the capacity to make impact on our environment. Since every human can think differently, have variety of desires and act with different levels of intelligence, we cannot expect two humans to act in an identical way in a given situation.

Though from one perspective, it looks to be messy and confusing, it also has an interesting advantage. As we all have different emotions and physical capabilities, we tend to have specific interests along with motivation to devote our time and energy over it. Thus, we tend to get extremely specialized in a particular domain or a field. On the other hand, we also have specific desires without any capability to satisfy it directly. Thus:

Again we face a problem, but not for long. If we notice it carefully, through our desires, we create demand. On the other hand, through our specialization, we can create supply of good quality products or services. This allows for a trade and the entire society can benefit from it. Personally, it makes us wealthy and happy as our desires get satisfied due to our interests.

However, this works if and only if, we accept that everyone is different. We are different because we have different interests and point of view. Once we understand how this difference can help us to be happy and satisfied, we realize that every individual and his/her point of view is important and special.

Conflict between different points of view 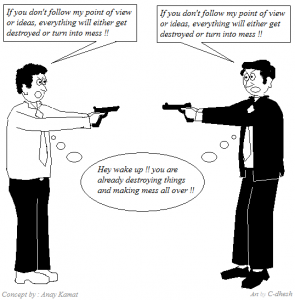 What do we learn from these experiences? We should realize that at any moment, we cannot decide on which point of view is good and which is bad. Only time can answer the question. In Puranas, we find Asuras worshipping Devas to get their wishes satisfied. Most of us still think that Asuras were the bad guys and find it strange that Devas used to grant their wishes. If we read those stories properly, we realize that they never said that Suras were good and Asuras were bad. They were simply two groups having two different situations and viewpoints. These stories also bring out the fact that even Suras have troubled the world out of their ego and have been punished as per their Karmas. This clearly describes the fact that at any point of time, we cannot decide on who makes the valid viewpoint. If that was the case, then Deva’s would have never granted the Asuras’ wishes.

Recently, in one online group, a member said that if we wait for the time to decide, then many things would get destroyed. Well, the only other way he could have pushed his point of view would be with the help of force. This is how some of the people actually try to practice dictatorship under the hood of modern secularism and democracy.

So can a point of view be a “Dharma” or a Religion?

The point of view can be considered as “Dharma” if and only if we try to follow it regularly without being self-focused. I have seen some students who believe in helping weak students and try to do so. However, during the time of examinations, they focus only on their studies and ignore their friends. In this case, their point of view of helping weak students cannot be termed as act of “Dharma” since they did not uphold it during the time of their exams.

We can see that by realizing that the point of view of every single individual is important and special, we can have a progressive society. This is why our ancient texts have taught us to follow dharma and all the stories actually share this wisdom. Unfortunately, the books today have reduced them to the stories of fight between good and bad and our education system does not give it proper importance. The proper education of Dharma would have made people realize the importance of respecting other’s point of view. Since we all have believe in different ideas, we cannot have a secular system. The only way we can live together is by following Dharma and not by ignoring it. In this post, we have seen how Dharma can help society. In the upcoming posts, we would also see how it can help us at personal level and also why the so called Secularism is not a feasible idea.